The Jr. Philharmonic Orchestra of California

The Jr. Philharmonic Orchestra of California 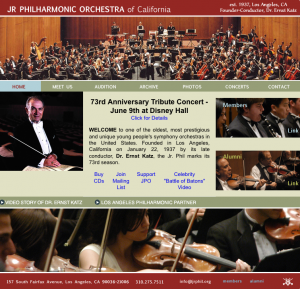 The Jr. Philharmonic Orchestra of California is one of the oldest, unique, and most prestigious young people’s symphony orchestras in the United States. Founded in Los Angeles, California in 1937 by its late conductor, Dr. Ernst Katz.