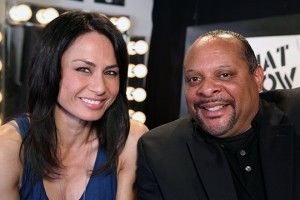 Kimberly Estrada has been directed by Academy Award® winners Clint Eastwood, Bill Condon, Oliver Stone and the Coen Brothers. You may have seen her on ABC’s LOST or CBS’s Criminal Minds.

Kimberly also appeared as Spokes-Model #16 for the first 36 episodes of the international hit game show Deal Or No Deal; she left the show to focus on her acting and hosting career.

Kimberly played Cherise Buffkin in 7 episodes of the CW Network’s dark comedy Easy Money. The cast included Laure Metcalfe, Nick Searcy, and Judge Reinhold. The series was created by Diane Frolov and Andy Schneider (The Sopranos and Northern Exposure). Most recently she appeared on NBC’s Chuck and ABC’s All My Children.

Her feature films Shut Up and Shoot and All for Melissa are now available on DVD at Amazon.com, Blockbuster, and Netflix.

Check out the first episode of Advent, the web series Kimberly is producing. Her character makes her first appearance in episode 2. Please help spread the word, and stay tuned!