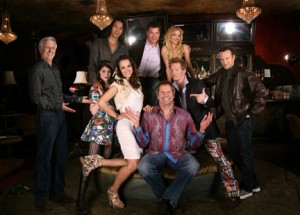 Aspen the Series follows an eclectic group of people who have decided to live together in a spectacular mansion on exclusive Red Mountain and do a reality series about – gee, I wonder who? – themselves.  Actually, the reality show is a birthday gift for WALTER MONTGOMERY, a very successful investment banker who has decided to take a break from his high pressure job and decompress into “normal life.”  Why does Walter want to do this?  Besides being a reality buff, he’s in the throes of a midlife crisis and the show will provide a nice diversion.  Of course, Walter’s midlife crisis means he’s already gotten all the fun he can out of owning a Maserati and he hasn’t quite evolved to the lets save the planet but keep my private jet phase.  Yes.  Insular?  Definitely.  But above all, it‘s very Aspen.