Posted May 20, 2015 by admin & filed under Sandro Monetti, Thespian Thoughts. 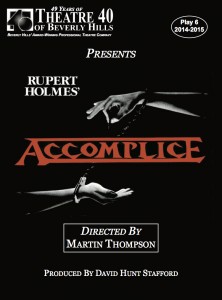 Featuring more twists and turns than the Pacific Coast Highway at Big Sur, this mystery thriller is one you won’t soon forget.

Opening with a couple who may or not be married in a home that may or may not be in England, it soon becomes clear that nothing is what it seems.

This fiendishly clever and often very funny play by Rupert Holmes deservedly won the Oscar of crime, the Edgar Award from the Mystery Writers of America, and there may well be some local theatre awards in the future for this triumphant production.

The cast of four; Michael Taylor Gray, Richard Horvitz, Alice Cutler and, most especially, Alison Blanchard all find multiple layers to their characters under the astute and adroit direction of Martin Thompson.

To share any plot details would ruin the surprises in store but if you’ve seen Sleuth, Deathrap or The Mousetrap – all of which are referenced here – you’ll know that the best thrillers are the ones that keep you guessing right up until the end…and that’s certainly the case with Accomplice. 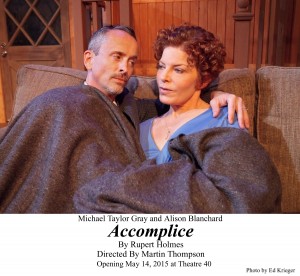 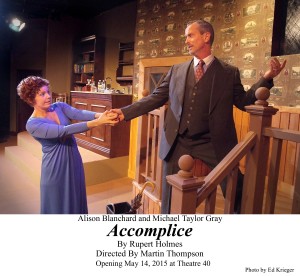 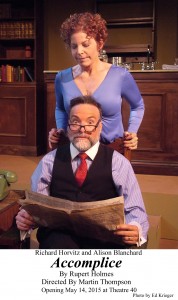