Thespian Thoughts Theatre Review – A Shred of Evidence – at Theatre 40

Thespian Thoughts Theatre Review – A Shred of Evidence – at Theatre 40

Theatre 40 of Beverly Hills presents A Shred of Evidence by R.C. Sherriff

Life seems to be going perfectly for Richard Medway … he’s just landed a lucrative new promotion at work, his children are in good schools and he has a loving and devoted wife. But then he turns on the radio and his world shatters. 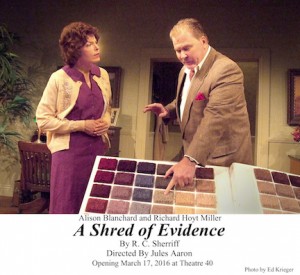 He hears a news report that a cyclist was killed the night before in a hit and run accident in his neighborhood. Richard begins to think he might have been responsible because he has only a sketchy memory of the night before when he foolishly drove home over the legal alcohol limit – and there’s a big dent in his car he can’t explain. 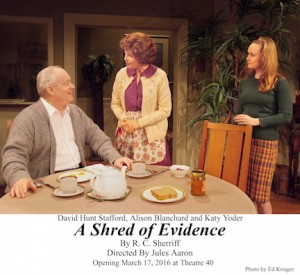 Richard’s choice is to stay silent or go to the police and his wrestling with that dilemma drives the drama in this suspense packed play at Theatre 40. 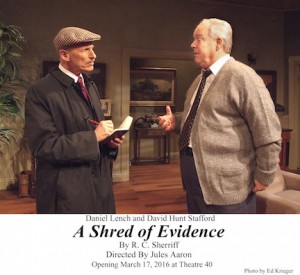 David Hunt Stafford as Richard does a great job of conveying his struggle over whether to do the right thing or keep quiet for the sake of his family’s future, gradually transforming from cool and collected to gibbering wreck. 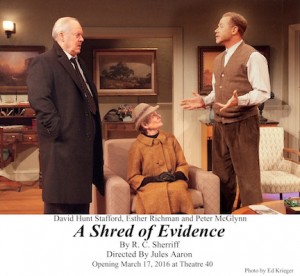 Meanwhile Alison Blanchard as his wife Laura veers close to Lady Macbeth territory as she tries to cover up her husband’s suspicious actions. 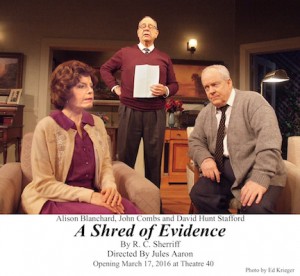 Investigating this duo is a dogged but unfailingly polite police inspector, charmingly played Columbo style by Daniel Lench. Adding to Richard’s problems is Peter McGlynn’s sinister blackmailer who adds another level of intrigue. 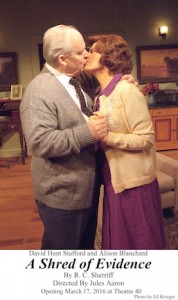 A Shred of Evidence