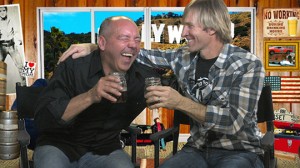 Marko Mavrovich was born in 1960 to Croatian parents living in California. At age 10, his parents moved back to Croatia with him. They moved around several of the islands off the coast of Croatia but spent most of their time on the Island of Unije. This was his favorite island and the beauty of the sea and coastline inspired Marko to begin sketching. With the support of his father, who was a watercolor artist, and his mother, his strongest critic, Marko honed his artistic abilities. During the summers, Marko sold his drawings to German and Italian tourists.

At the age of 17, despite encouragement from his parents to attend an art school, Marko chose to enroll in a school for Navigators. He never lost his passion for his art, and for the 4 years he was at Navigation School, he continued drawing. When he was finished with school, he went to work on ships, perpetually struggling with his two loves – the sea and his art.

It was not until his father died that Marko had moved back to the United States where his love for art finally took over. It came after working more than 3 years as a commercial diver. “Being underwater in absolute silence helped me clear my thinking,” he said. “I finally realized I should be doing something better with my life.” When a rogue propeller nearly took a limb one afternoon, severing his air hose and cutting his wet suit, Marko realized it was time for a career change. His solitary hours underwater gave him the time and insight needed to push him back toward his love for art for good.

Marko then began drawing, painting and exhibiting his work in street shows where he was discovered by established galleries. Those galleries gave him valuable exposure through exhibiting his artwork around the country. He began painting what he knew: coastlines, seascapes, and landscapes. He initially attempted painting nudes in the legacy of his father but felt he should wait until he had matured as an artist before attempting the genre again. He focused on the colors of California – warm shades of red and gold that felt special to him.

Marko’s artwork is influenced by his father, Winslow Homer, John Singer Sargent, the Impressionists, and the California Impressionists like Edgar Payne. He is still inspired by the islands of Croatia and living on the edge of the sea, wherever he is. It’s his love for the ocean and hillsides, and his desire to capture the effects and colors of the sunlight that propel him, – dominant themes in his work. For Marko, everything in life involves water and boats.

His studio is what he calls “organized chaos” and only he knows where everything is. Projects that may occur within in the next six months are strategically placed around the room so they’re available at all times. He surrounds himself with studies, notes, and supplies. In the morning, the first thing he thinks of is painting. He’s only deterred by running or taking care of his dog.

When chores in the home and garden don’t intervene, Marko likes to paint for 10 hours straight. He listens to music throughout the day, changing genre as the daylight fades. While he begins with country music in the morning, he transgresses to heavy rock by mid afternoon, followed by R&B, and then smooth jazz.

Among his favorite places of inspiration are Catalina Island, Laguna Beach, the North Coast of California and old Spanish Missions. Recently the artist has traveled to Argentina, Mexico, Alaska, and the Caribbean. He also spends time in parts of Europe and Croatia where he has enjoyed considerable success. When he’s not painting or spending time with his collectors, Marko devotes a portion of his time to charity, volunteering his time and artwork for causes like Ovarian Cancer, the Women’s Heart Association, and various dog rescue organizations.