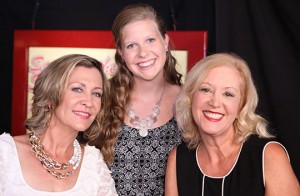 Comedian/Writer/Actress Erin O’Connor told her first joke for money in San Francisco 28 years ago and became addicted. She abandoned her career as an Advertising Copywriter at Ogilvy & Mather and hit the road. Her travels as a road comic took her to 41 states and eight countries: Japan, Korea, Germany, England, Denmark, Scotland and Canada. And during her travels, she fell in love with food.
In 1992 she married comedian Bob Zany and cut back on road work, allowing time for another passion, acting. Favorite jobs include a recurring role on In Living Color, a pilot co-starring her comedy idols Fred Willard and Martin Mull (just the three of them…improvising!!!!) and a quick but memorable flash as the Crazy Cat Lady (speaking of type-casting) in Green Day’s award-winning music video, Time of Your Life.
Over the last two years, Erin’s love of animals prompted her to once again ditch meat entirely and attempt to cut out dairy and eggs. The result was her 100 Day Vegan Challenge, designed to put a New Face on an Old Vegana. Can a part-time animal product-free lifestyle improve your health and dispel the myth of the beastly, hairy, Croc-wearing vegan once and for all? Follow her often hilarious, but determined ride and find out. (On FaceBook The Vegana Monologs and twitter @VeganaMonologs)
Why a monolog you ask? Because Erin has never required another person to carry on a conversation.
Currently, Erin and her husband co-host The Bob Zany Show with Erin O’Connor podcast, sitting down for thirty minutes of serious with comedians. Guests include The Unknown Comic, Last Comic Standing winner Alonzo Bodden and Teen Wolf Coach/Dream Boat Orny Adams. Erin is also tip-toeing back into stand up and working on a metaphysical fairy tale for kids, “Henry David the Rottweiler,” as well as a line of vegan dog treats.
Erin and Bob share their San Fernando Valley home with Rottweiler mix Henry, Dalmatian mix Frankie and five formerly feral felines. Spare time is filled with animal rescue, spay/neuter activism, The San Francisco Giants, cooking, movies, Jeopardy, the Pacific Ocean and lots of churchy stuff.

Peyton Segrest is a 15 Years old from Baton Rouge LA. She is an Inspiring actress and world changer. Loves travel,
singing, baking and of course food! She hopes one day to move to L.A. and go to College at UCLA.