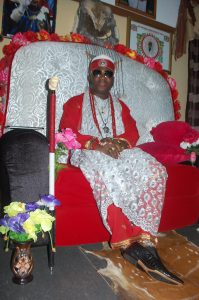 His Spiritual Majesty {HSM} Emperor Alafia Adeoba Amitabha Shalom is a native of the ancient spiritual city of ILE-IFE in OSUN STATE within the geographical nationality of the FEDERAL REPUBLIC OF NIGERIA.

His Majesty had his college education in ILE-IFE. After his college education, he advanced his education at OSUN STATE COLLEGE OF TECHNOLOGY (OSCOTECH) where he earned Higher National Diploma (HND) in ACCOUNTING. Still on the quest of educational exploration, he also had a BSC degree in PHILOSOPHY, POLITICS & ECONOMICS {PPE}‚ at OBAFEMI AWOLOWO UNIVERSITY (OAU) in ILE-IFE. Later after his university education, he was admitted into the INTERNATIONAL INSTITUTE OF AVIATION {IIA} in LAGOS where he earned POSTGRADUATE MANAGEMENT DEGREE in AVIATION WORLD & AIRLINE LOGISTICS. Furthermore, His Majesty also has a diploma certificate in HINDU PHILOSOPHY from the UNIVERSITY OF DELHI in INDIA and respectively he was honored with a DOCTORATE IN DIVINITY at the ALEXANDRIA UNIVERSITY in EGYPT.

In recognition of His Majesty’s immaculate propagation of true spirituality and his earnest service to humanity, His Majesty was fraternally coronated as the WORLD VENERABLE GRANDMASTER (WVG) & GRAND MASONIC EMPEROR (GME), THE VENERABLE SACRED ORDER OF TRUTH‚ in the millennium year of 2000AD by Nigeria Former Attorney’General, HONORABLE JUSTICE ADEWALE THOMPSON. His Majesty worked with the Federal Authority of MURITALA MUHAMMED INTERNATIONAL AIRPORT‚ in LAGOS as a Flight Management Senior-Officer and also with the NIGERIA AVIATION HANDLING COMPANY (NAHCO)‚ as a Cargo Handling Agent for some years before his appointment as the INTERNATIONAL SPIRITUAL & CULTURAL AMBASSADOR FOR THE YORUBA NATION‚ which was royally endorsed and officially certified by His Imperial Majesty {H.I.M} OONI ALAYELUWA OBA OKUNADE SIJUWADE OLUBUSE II {The 50th OONI OF IFE} in the year 2010AD. Also in year 2013, His Majesty was also bestowed the imperial title of OBA ORISA AGBAYE.

In Recognition Of His Majesty’s Immense Propagation Of Global Peace, Outstanding Lifestyle Of Humanitarianism, Universal Quality Of Love & Peaceful Voice For Human Right, ARTS 4 PEACE AWARDS which is a USA-based global peace foundation majestically endorsed His Majesty as a GLOBAL PEACE LEADER so as to commemorate his leadership role of peace among every global citizens, nations and continents. 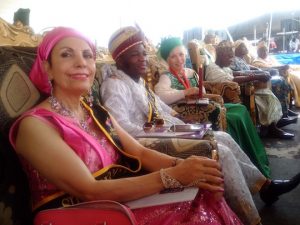 As the EMPEROR of a global fraternity of intellectuals and also as a traditional KING, His Majesty presently works as a Paranormal Philosopher & Intercontinental Ambassador of SPIRITUALITY and His Majesty’s utmost sacred mission is to AWAKEN MANKIND FROM DEEP SLEEP OF DECEIT
THE VENERABLE SACRED ORDER OF TRUTH {AOI} INCORPORATED 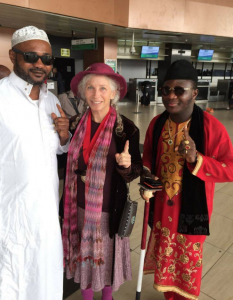