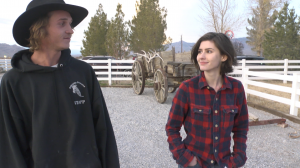 Teen Angel: A teenager killed in an auto accident tries to earn her wings so that she may ascend to heaven.

Written by Pepper Jay
adapted from a script by D. M. Larson

PEGGY (Katelyn Haynes) : A teen who has found herself on a mission after her death.

GABRIEL (Anthony Dupin): The guide upon the stairway to heaven.

DAVID (Maurice Dwayne Smith) : A mysterious angel who offers to help PEGGY in her mission.

RICK (Elyas “EZ” Baon) : A teen who has lost his girlfriend in a car accident.