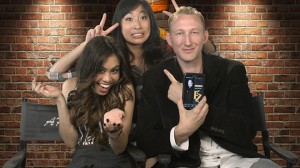 Meeghan Henry was born in Jakarta, Indonesia on January 7th, 1995. She emigrated to the US with her mom at the age of four to San Dimas, CA, a little town in the San Gabriel Valley. Ever since she was a child, Meeghan loved to sing, so her mom put her into the Vocal Power Academy to advance her vocals, and it pushed her to become the voice of her elementary school, singing the national anthem at all her school games. After elementary school, she became a voice major at one of the best performing arts middle schools in LA, Millikan Middle School. Her talent shined through again and she was chosen to sing for the mayor of LA, Antonio Villaraigosa.
Meeghan is now part of new girl group Girl Radical, created by JC Chasez from NSync and Golden Globe award winning producer and songwriter Jimmy Harry. Following in the footsteps of Michael Jackson, LeAnn Rimes, and Miley Cyrus, Los Angeles’ own Meeghan Henry is striving to become her generation’s pop music prodigy, not only wanting to be a singer, songwriter, and producer, but also to be a professional in the music industry.

Ashley Spencer Argota (born January 9, 1993) is a Filipino-American actress, singer, and student. She is best known for role as Lulu in the Nickelodeon sitcom True Jackson, VP. She also co-starred as Kelly Peckinpaw in Bucket & Skinner’s Epic Adventures on Nickelodeon.
Argota was born in Redlands, California and her background is Filipino, her parents and family being from the Philippines. She began her professional career as contestant on the Arsenio Hall-hosted Star Search on CBS in 2003. She began acting at the age of 14. In 2007, she starred in an independent film titled Schooled. She also appeared in a Nickelodeon celebrity-episode of the series BrainSurge during which she lost during a Sudden Death round to Jerry Trainor. She appeared again in 2011 with other various Nickelodeon celebrities and won. Argota confirmed on July 5, 2012 that Nickelodeon has cancelled Bucket & Skinner’s Epic Adventures. It is unknown if the remaining episodes will be shown, however all episodes were broadcast in other countries. On December 22, 2012 TeenNick aired the previous never before seen in the US, Christmas episode. Starting March 27, 2013, the previous 7 never before aired in the US episodes aired on TeenNick in the US. Argota attended Connections Academy in Los Angeles, CA.