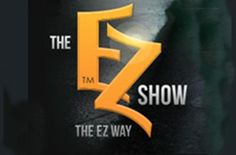 The EZ Show on Actors Entertainment 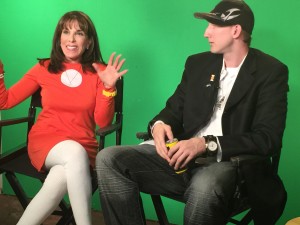 Kate Linder
Kate Linder received a star on the Hollywood Walk of Fame on April 10, 2008 and Mayor Antonio Villaraigosa, Y&R co-creator Lee Phillip Bell and castmate Jeanne Cooper spoke at her well-attended ceremony. Kate had roles in the feature films Hysteria (2012) and Erased (2013), Miss Meadows (2014) starring Katie Holmes as a teacher with Linder as Trudy Navis, the school’s principal. The film marked Linder’s first film with a single card credit upfront and she loved working with Holmes, whom she described as an incredibly generous actor. She just wrapped another two features, Stereotypically You and Voices from the Stone.

If you’re Kate Linder, you don’t quit your job as a United Airlines flight attendant because you’re cast for a one-day, one-line role on The Young and the Restless. Linder has done both jobs simultaneously for the 33 years she’s been on the #1 rated soap opera (that’s #1 every single week for 26 years) in daytime television — with the resulting confusion among passengers creating hilarious anecdotes. The passenger/fan response has been overwhelming and incredulous. Fortunately, she’s been working only the first-class section for decades and unlike Linder, none of her co-workers there have graced the covers of soap opera magazines. She was preparing for take-off on a flight when the late Johnny Grant called to inform her she had been selected for a Star on the Walk of Fame. Linder is also active with the USO, visiting troops in the US, in Afghanistan, Pakistan, Korea and Guantanamo Bay. In late ’05, Linder was elected Governor of the Daytime Programming Peer Group of the Academy of Television Arts and Sciences (yup, the folks who put on the Emmys), she was reelected in ’07 for a second two-year stint. She is currently an active and longtime board member for SAG-AFTRA.

Linder, as Esther Valentine (so named because Linder was married on Valentine’s Day), confidante/ housekeeper to the soap’s wealthy and powerful matron, Katherine Chancellor (portrayed by the late Jeanne Cooper) has often been called upon to add a touch of humor to the show. Her character has been perennially unlucky in love and her two brief marriages were to con men only after the Chancellor fortune. She and her boss were twice kidnapped in pursuit of the same fortune. Her on-screen daughter, Chloe, made Esther a doting grandma.

Kate is an eternal optimist and tireless worker for many charities and was named celebrity spokesperson for The ALS Association in early 2005. Her brother-in-law was diagnosed with ALS (Lou Gehrig’s disease) in December, 2004 and Kate has gone to Washington, DC each May to lobby for more funds to fight this disease with no cure. In 2006, Linder won the organization’s All-Star Award for her passionate service to the cause and won their Packman Award in 2007. Kate travels around the country to participate in and encourage other volunteers at the ALS Association’s fundraisers, Walk to Defeat ALS, and in their fundraising dinners for local chapters. She’s also active with many AIDS charities and the Los Angeles Mission. 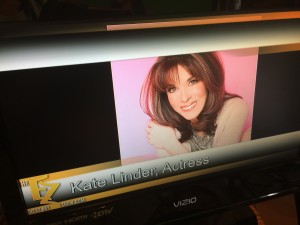 Kate Linder on The EZ Show