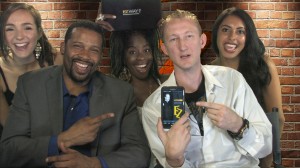 Chicago native Trae Ireland is an actor. His television career began on the award-winning sitcom “Moesha.” Following his stint on Moesha, Trae landed roles on Emmy award-winning shows, “Once and Again” and “JAG,” which led to being cast in the films, the award-winning “Coach Carter,” “The Comebacks,” and “Breaking All The Rules.” On the set of “Breaking All The Rules,” Trae met CEO Clint Culpepper of Sony Screen Gems, the film studio that produced “Death at a Funeral,” “Takers,” and “Think Like A Man.”

As a producer, Trae has worked with some of the entertainment industry’s elite, including but not limited to, Laurence Fishburne, Jamie Foxx, Martin Lawrence, Chris Rock, Jean Reno, Matt Dillion, and Zoe Saldana. Acting still plays a big role in Trae’s career; he has a recurring role as Jason Campbell on the award-winning TV One show, “Love that Girl,” executive produced by Martin Lawrence and created by Bentley Kyle Evans. He guest starred in the award-winning Fox TV show “Bones,” and starred in the David E. Talbert’s play, “A Fool and His Money,” as Smith.