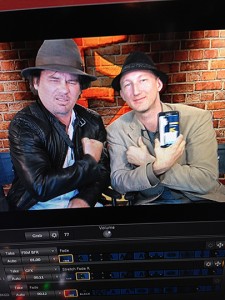 Actor Richard Tyson
TYSON DC PRODUCTIONS
Richard Tyson was born in Mobile, Alabama but eventually pursued his love of acting and moved to Hollywood, California. Landing one of his first roles on the hit TV show, ‘Moonlighting’ (with Bruce Willis and Cybil Shepherd), Richard’s career took off from there and hasn’t shown any sign of slowing down since. Best known for his roles as Buddy Revell in ‘Three O’Clock High’, Cullen Crisp in ‘Kindergarten Cop’ (opposite Arnold Schwartzenegger) and Perry in ‘Two Moon Junction’,

Richard has time and time again proven his versatility as an actor in not only the different characters he plays, but also in his ability to go from feature film star to television actor to theater performer (he regularly takes to the stage to perform Shakespeare).Richard was the star of his own television series called Hardball which ran for a year in 1989.

He has also appeared on various other TV shows throughout his career including his most recent appearance on CSI:New York.With a long list of film credits including ‘Black Hawk Down’, ‘There’s Something About Mary’, ‘Kingpin’, ‘Genghis Khan’ and many others, Richard has shared the screen with a wide array of actors including Charleton Heston, Orlando Bloom, Ben Stiller and John Travolta.

In addition to his extensive film and television career, Richard holds a Masters Degree in Fine Arts from Cornell University and once taught acting there.

Richard’s other films include “Jake’s Corner”, ‘Naked Run’, ‘Richard III’, ‘Plane Dead’, ‘The Visitation’ and the horror film, ‘Big Bad Wolf’ in which Richard plays a stepfather accused by his stepson of being a vicious werewolf. Richard returned home to Alabama for the premiere of the film, ‘When I Find The Ocean’ – the first film he has been in to be shot in his home state – and soon after visited Russia where he accepted the Peacemaker Award.

Richard recently finished shooting a film in Puerto Rico called “Demented” playing a detective and is starring in a new Lifetime Movie for 2013. He is also looking to direct and produce his own films and continues to seek interesting and challenging roles to play.
Richard has just wrapped a movie last week called “REVERSAL” which is a Brillstein Grey Production set for release in 2014.

He is currently working on new project called “Lost in Darkness” for New Line Films.

Starting Oct 6th he will be shooting a Sci Fi movie called “Sector” which he will be starring and executive producing. Also starring will be Roddy Piper and Lance Henriksen.

Arts & EntertainmentMovies Richard Tyson (Something About Mary) cast in “The Sparrows” TV series.

March 18, 2014 Nancy Criss, Director of the new Family-Inspirational TV series, The Sparrows, has announced the attachment of Richard Tyson to the cast as the Reverend Davis. Richard is best known for his roles in Three O’Clock High, Kindergarten Cop (opposite Arnold Schwartzenegger) and Two Moon Junction. He was also the star of his own TV show, Hardball, and CSI: New York. Some of Richard’s other films include, Black Hawk Down, Naked Run, and the horror flick, Big Bad Wolf. Richard has acted alongside some of the greatest actors in the industry, Orlando Bloom, Ben Stiller, Charleton Heston and John Travolta, to name a few.

One Response to “The EZ Show with actor Richard Tyson, singer Melanie Taylor and the EZ Way Angels”