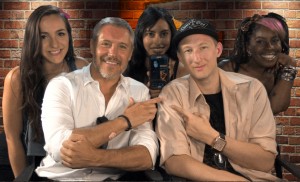 Actor Max Ryan is known for his roles on Sex and the City 2, Dallas, Rage, and Death Race, to name a few.

Ryan originates from England, Ireland and Poland, his paternal grandfather was half English and half Irish and his paternal grandmother was a Polish Jew. Ryan’s mother Elizabeth Lynette derived from English parents and married his father. Both were interested in fine arts so Elizabeth Lynette left her job as a croupier and became a fine arts dealer with her husband and spent many years traveling across Europe and America. During this time Ryan’s older brother was born and some years later Ryan. The adventure continued for many years across Europe and America when finally the journey ended and the family settled in England. During this time Ryan attended school. He enjoyed school and won many running and high jump events even though during these years Ryan endured a lot of punishing for speaking his own mind and being stubborn, so public punishment soon became a weekly event that eventually began to amuse him.

Ryan’s family home was broken as his mother and father were divorced by age seven. Due to his parent’s split Ryan spent sporadic times with his father as he helped him with his sports. The years continued and sports became an integral part of his life leaving the academics behind. Soon his father was lost in his own world leaving, his mother, Elizabeth to make good of her sons. It was not until four years later that she met and remarried. Elizabeth married Jack who was also from a broken marriage with three daughters. Fitting in with his older brother and older sisters was a challenge but nevertheless with the obstacles and blows they all survived the adventure. During this time Ryan’s younger brother Jack was born and the years to come would be good, as they have just celebrated their silver anniversary. Ryan’s passion in sports soon led him to captain of the school football team and a weekend team which would lead him to a trial for an international football team. Ryan soon took interest in the International motocross events and soon sponsorship took presidency for many years at this level with great wins and solid sports achievements, a flurry of broken bones would spread over a two year period. At this point he had to survive so getting a job as a car mechanic was the nearest he could be to an engine. Ryan began working as an apprentice Ferrari Mechanic that lasted for years.

During this time frame he attended college earning a Higher National Diploma (HND & HNC), allowing him to become a licensed Technician. Being an adrenaline junky was not easy and speed was a necessary evil. Ryan’s reckless and fearless behavior would promote many car accidents. This led him to the track where he lent his talents to one of his favorite pastimes, motorcycle racing. Soon after, his level of racing had progressed to the highly competitive British Championships, unfortunately in 1998, a high speed crash nearly cost Ryan his life.

The moments kept coming and unusual circumstances would continue to arise when during a family ski holiday he heard a scream outside his hotel apartment, when he went to see where the noise was coming from he saw an Alsatian dog attacking two girls in the snow. Ryan jumped over the balcony and fell three stories landing in deep snow breaking his fall. Ryan fought with the dog allowing the girls to escape safely back into the building. After years of unusual and great circumstances Ryan moved to London and enrolled in a day theatre class, shortly afterwards he was asked to cast for a TV commercial and with the success of that he began working as a professional actor.