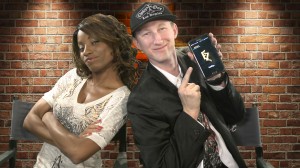 The beautiful and talented actress and singer Angelique Bates was born and raised in Los Angeles, California, and is of Haitian and Native American descent. Bates got her start in a Borax commercial when she was a baby. She subsequently landed an AT&T commercial and a co-starring role in the movie Sweet Potato Ride. Many years later, she got the job on a new sketch comedy series.

Bates’ agent sent her out to audition for All That and they liked what she did. She did a Steve Urkel impression among other things. Following four or five auditions Bates got the part.

After two seasons she left the series. She did however return for the 100th episode, along with fellow All That alumnae Katrina Johnson and Alisa Reyes.

After leaving All That, Angelique later booked a co-starring roles on Strong Medicine and Boston Public. Her MySpace page includes such songs as the “Numb / Encore”-sampling “Fly So High”. Bates has also done several projects on her YouTube channel (angeliquebates) with former All That cast members Katrina Johnson and Alisa Reyes. She is the famous Bub Bub Lady from Tim_and_Eric_Awesome_Show,_Great_Job!. You can also find her in 35_and_Ticking starring Kevin_Hart, Mike_Epps, Nicole_Ari_Parker, Clifton_Powell, & Meagan_Good. Bates signed a record deal and released her international single available on iTunes “Can’t Fade Me Now” and her own personal Angelique Bates APP. Bates made an appearance in the music video for “Love Never Felt So Good” by Michael Jackson and Justin Timberlake.

Also in this episode of The EZ Show, please enjoy our EZ Way Angels: Sonia Harley and Barbara Sandifor.