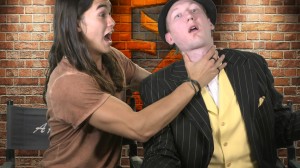 Standing out amongst his generation as the next breakout movie star, Booboo Stewart is sure to build a lasting career similar to the likes of Leonardo Dicaprio and Johnny Depp. Between his good looks, charms and many talents to boot, he is consistently listed as one of the “Faces to Watch” amongst the hottest in Hollywood.

BooBoo Stewart (born Nils Allen Stewart, Jr.; January 21, 1994) is a singer, dancer, model, actor, and a black belt Hall of Fame martial artist. He has appeared and starred in several independent and TV films including episodes of “Steve Harvey’s Big Time Challenge,” “ER,” “Dante’s Cove,” and “Everybody Hates Chris.” Building his resume as a versatile actor, he has done stunt work on several films including the 2006 film, Zoom, as well the 2007 film, Beowulf, and hosted six episodes of children’s show Blue Dolphin Kids in Hawaii. During 2006-2008, he was member of Disney’s musical group, T-Squad. He toured in Camp Rock Freestyle Jam, and with “Hannah Montana”/Miley Cyrus in her Best of Both Worlds Tour featuring the Jonas Brothers. He recorded the opening theme from Disney Channel Games 2008 “Let’s Go!,” and in 2010 “Under the Sea (from The Little Mermaid)” for the Disney recompilation disc DisneyMania 7. Currently, he is touring with his sister Fivel Stewart, and they are set to release their album “Change” in the spring of 2011. His imagination and creative talents also brought him to illustrate a new and exciting comic book entitled “Millennium Man,” which will be unveiled this year. In 2008, he was featured in various campaigns, and was “the most in demand male model under 18 in the country.

In his free time Booboo likes to give back. In 2010, he was named a Celebrity Ambassador by the Muscular Dystrophy Association. He participated in MDA’s “Make a Muscle, Make a Difference” PSA campaign, featured in print and TV ads. He also supports the Los Angeles Mission, various children’s charities and has traveled to Perth, Australia for the Channel 7 Telethon, raising money for children at Princess Margaret Hospital.

Currently, look for Booboo on X-Men : Days of Future Past and on the TV Movie Descendants.