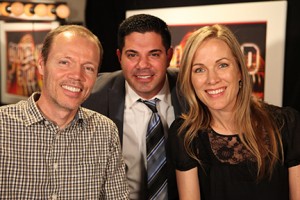 Singer/songwriter, Debra Arnott has spent over half of her life traveling across the country and ministering the gospel. She discovered her passion for music at an early age, and it didn’t take long for those close to her to see this unique gifting as well.

Although Debra was active in many sports, they quickly took a back seat when she auditioned and landed the lead role in the musical version of The Pied Piper. She threw herself wholeheartedly into this new creative outlet, and shortly afterward was cast in Chanhassen Dinner Theatre’s production of Annie. Debra was shocked to find out she could be paid to do what she loved.

Debra pursued theatre throughout high school and worked diligently to graduate one year early and begin her studies in the honors courses of cultural liberal arts at the University of Minnesota. Meanwhile, she earned the title of 1st runner up in Minnesota’s Jr. Miss and was named Miss Congeniality (not the movie). While in college, she performed on the U of M Showboat and started a short-lived band called “Swindled in New York.”
After two years of college, Debra began feeling unsettled and opted to relocate to Florida on a quest to “find herself.” During this journey, God found her first and placed new desires in her heart, which led to a new life. She began by getting involved in the worship team at her church, which brought a new found meaning to “being on stage.” She knew this was not a performance, and she had no appetite for stardom. Her direction shifted with a hunger to know the One she was worshiping to a greater degree.

Two years later she graduated from Rhema Bible Training Center with a focus on missions. Shortly thereafter she and her best friend and husband, Mark, entered full-time ministry. Along with being a youth pastor and leading worship throughout the United States, Debra booked the role of the antagonist on Fire By Nite, as well as Maria in The Sound of Music at the historic Dixon Theatre, and co-wrote the musical, Another Chance. Debra also won a songwriting contest put on by Babbie Mason, which led her to write and record her first solo CD titled, Happily Everlasting.

Debra and Mark continued to travel the country and minister together in various churches, as well as teach classes at the International School of Faith in Sarasota, FL. It was during this time that Debra was hired as a voice-over artist to play the lead character Squiggz on the animated series, Roach Approach / Bug Rangers. This garnered Debra the opportunity to work on the same project with some of her favorite artists, Nicole C Mullen, Toby Mac, and Natalie Grant. Her arms still bear the pinch marks.

They moved to California in 2007, where Debra became a part of the worship team at In His Presence Church. In 2009 she was offered a full-time staff position at IHPC, and by 2010 was ordained as the Worship Pastor. In this role she created ONE Worship, a multi-cultural, multi-gifted worship team of over 60 people. Debra’s passion to see unity and wholeness restored to the body of Christ was on full display among her team. Her heart’s desire was to see competition and comparison exchanged for humility and family; substance in place of form. In addition to leading worship during weekly services and prayer gatherings, Debra taught weekly worship classes for her team, created and led team building retreats, and wrote multiple songs for One Worship, which led to album recordings and annual CD release concerts. The music of One Worship includes all original music designed to glorify Him alone. One Worship Vol II debuted at #6 on Billboard in Christian music.

Debra remembers once being asked by her sister, “What do you want to do with your life?” to which she answered, “I want to write music and glorify God in song around the world.” At the time Debra hadn’t written a single song. Nevertheless, her response to her sister is now coming to pass. Recently, Debra and Mark felt the nudge of the Holy Spirit to step out into the next season of ministry together. This has led to the completion of her most recent EP Still Counting, and future plans to release several more songs in 2014.

Her heart is to bring HEAVEN UNCENSORED to earth through song and God’s Word; healing for the broken hearted, renewed hope to the hopeless and restoration to the Body of Christ. Debra’s desire, through her music, is to RESTORE, REFRESH, RECONCILE, REBUILD, REPAIR, RENEW, RESURRECT, and REUNITE His Bride.

Debra’s ultimate goal is to remain smack dab in the center of God’s will for her life, not falling short of completing all He created her to do, finishing her course with joy and hearing “Well done!”

Connect with both Debra and Mark Arnott at DebraArnott.com