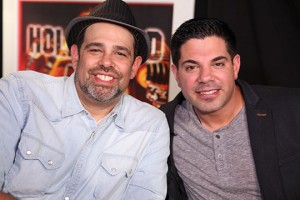 Rabbi Jason is the director of Fusion, an outreach and teaching ministry. Fusion is committed to the spiritual growth of Jewish and Gentile believers, teaching the Jewish roots of the faith, and advancing The Kingdom through unity in Yeshua. Fusion also seeks to minister to young adults in the Los Angeles. Fusion is touching the lives of a number of individuals, many who are involved with the entertainment industry.

Fusion Global is focused on revolutionizing faith by:
Reconciling & Uniting Jews and Gentiles to release the fullness of God’s blessings
Restoring the Jewish foundation of The Faith
Reaching & Equipping media, marketplace and ministry influencers to achieve world-wide impact.

The resulting power of this revolutionized faith will be a radical, fused body of believers
who will be igniters of a spiritual and cultural awakening that will spark a global transformation.


G-d in Hollywood Hosts
The hosts of G-d in Hollywood, Todd Coconato and Brenda Epperson, are on a mission! A mission to stand for what is right and positive-IN HOLLYWOOD! Todd Coconato is a Speaking Pastor and Worship Director who preaches a powerful message of true healing. Todd is a radio talk show host that is dedicated to his cause of informing and equipping the those who have the same passion to be a light in the darkness. Brenda is a singer and an actress (best know for her 8 years as a lead on The Young and the Restless) and a wife and a mommy, one of the founders of Women’s Ascend, and she has God & music in her soul. Both believe that GOD is up to something good in Hollywood!