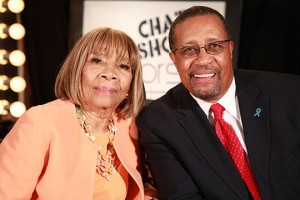 During her long career, Mable has performed with some of the greats of the business, people like the late Billie Holiday, B.B. King, Bill Doggett, David Newman and of course, Ray Charles. A picture taken at the close of a show at the Flame Show Bar in Detroit depicts Mable with Billie Holiday, with whom
she shared the bill and Berry Gordy. Billie Holiday’s husband liked the photograph and had a ceiling to floor, wall to wall blowup made, which now hangs in the studios of Paramount Pictures in Hollywood. The musical dates that she shared with Billie Holiday had been arranged by Berry Gordy. A major part of the show business world is public relations, how to sell yourself, Mable says she learned that from Mrs. Bertha Gordy. She evidently learned it well, because her ability to relate to audiences exmplifies her early training. At home, Mable has four sons, of whom three are deceased within the past two years. Two of her sons, Joel and Limuel, had launched the own show business careers, also serving as Executive Vice Presidents of her publishing companies. 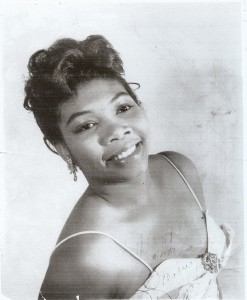 Mable John as a Rayette