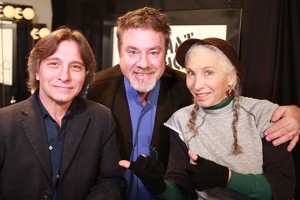 Marlon W. Schulman’s leadership in creating targeted, revenue-producing communities within the entertainment industry is enhanced by his intuition and passion. As an entrepreneurial producer and attorney, his specialty is the creation of diverse profit-driven entertainment products and services through innovatively conceived integration of proven strategies with new
technologies.

Early recognition of voids in the marketplace is key to his approach. Before anime was widely recognized in the United States, Marlon formed an on-line, global community of avid fans with Anime Village for Bandai; with ground-breaking, value-reinforcement series of manga graphic novels, he addressed the otherwise-ignored concerns of young, mostly female, faith based readers; by shepherding Opus 1 Music Library’s entry into new mobile technology, he led a generation-old business into the digital age.

Marlon’s active, strategic stance at the crossroads of new technology, law, business and the creative arts has led to the generation of hundreds of millions of dollars in fresh revenue and the establishment of long-running revenue streams in the entertainment industry.

An attorney for over 33 years and avid traveler, Marlon lives in Los Angeles (but remains proud to have be borne and raised in Brooklyn) with his amazing wife, the founder of NDH Search (a boutique executive search firm for architects and designers world-wide) and his even more amazing daughter.

Brian Herskowitz is a veteran Hollywood producer, writer, and director of feature films, TV series and digital series. He is the author of the best-selling book, Process to Product: A Practical Guide to Screenwriting and is a faculty member at the Boston University of Los Angeles’ graduate degree program, Writer in Hollywood.

Brian is an active voice-over artist including hundreds of hours on the classic horror shows Buffy the Vampire Slayer and True Blood. He is currently directing and writing several HEF-supported projects including She Feeds, The Whangdoodle, and Creature Feature: The Movie Musical.

A fourth degree black belt in Judo, Brian is the 2014 National Master Champion in Judo and the 2013 Pan American Champion in Jujitsu. He lives in Los Angeles, is married to actress Gina Hecht (Mork and Mindy), and has two amazing daughters.

Horror Equity Fund LLC is a mechanism for the development and funding of Horror entertainment Projects. The business model has been successfully proven (Proof of Concept – Business Memo below.)
Horror Equity Fund LLC leads the industry in genre-specific flexible funding solutions for horror-centric projects including films, ancillary rights exploitation and other horror-related projects.

Horror Equity Funding LLC singularly differs from other Platforms as HEF will manage the funding campaigns for all Projects on behalf of all Project Issuers. Horror Equity Funding LLC can do this because of its deep, wide knowledge and connection to the Horror Community as well as interested investors, networks and others. With robust, in-place marketing outreach, deep analytics and retained data on all investors, consumers and projects, HEF becomes the “go-to” Platform for genre development, marketing and funding. HEF’s centralized control and management of equity marketing campaigns for each Project is unique in the industry and brings with it otherwise lost essential data and profits.

Horror Equity Funding LLC differs from all other Crowdfunding companies as it will actively participate to develop the Project to its potential for not only full funding, but for commercial success by, in part, reverse engineering the launching of a Project into the marketplace.
HorrorEquityFund.com (HEF) brings together Investors and Content Creators in a simple, transparent and compliant online ecosystem that provides a unique opportunity for all participants to share in the amazing profits often realized in the world of Horror entertainment.

Unlike “pre-sale” or donation-based crowdfunding platforms like Kickstarter, which solicit donations or contributions in return for a poster, download, or other consideration, Projects presented through HEF offer real ownership and profit participation (an equitable interest).

HEF’s project development process improves the chances for commercial success in the marketplace by actively developing projects with the Content Creator and leading professionals in the Industry. HEF works not only on “fundability”, but also on the profitability of Projects. HEF’s flexible business model negotiates a balance between fees and earned equity.

With its companion community site, Federation of Horror (which provides a social media marketing/investment/resource “game preserve” created specifically for such purposes), HEF has been uniquely created to tap into the perennially high ROI Horror market and provide a robust vehicle for fans, professional creators and investors.
Together, with promising Projects lining the shelves, HEF is a virtual Supermarket of Horror™.

HEF’s Overall Strategy
While there is plenty of “content” available to select from (horror stories, horror scripts, unfinished films, “horror-adjacent” content and stories, etc.), essential to HEF is that not only does a Project have to be able to attract funding for completion (e.g. viable for funding), but it needs to have the greatest chances for commercial profitability. Thus, HEF’s emphasis on “reverse engineering” of Projects.

HEF’s primary goal is to identify and engineer, through a unique business model, those Horror Projects it believes will be commercially successful and then, raise the necessary funding on a SEC-compliant platform (under Reg. D 506(c) and ultimately, Title III raises.) Ultimately the combination of the quality of the content, track record of its creators and Project packaging will determine which Projects get funded.