Find out more about Katrena Rochell
on IMDB! Also find her at
KatrenaRochell.com 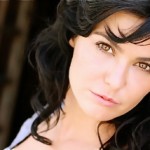 ActorsE Chat is on Actors Entertainment, a site on the Actors Podcast Network, a Pepper Jay Production.