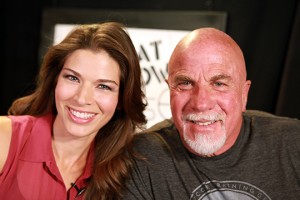 Adrienne Janic, sometimes credited simply as AJ, is an American actress and television host of Serbian and Mexican descent. She has primarily worked as a television host including as a co-host of the TLC’s Overhaulin’, an automotive, reality-television series. She was also a host of Hot Import Nights (2008), an automotive show on the Speed Channel.

She has appeared in several films including appearing as an extra in the film National Lampoon’s Cattle Call (2006). From 2004 to 2006, Janic was one of the Fantanas, a group of promotional models that was created to promote Fanta brand of soft drinks in the U.S. In 2009 she was a Co-hostess, with Tinker Keck (as Ty ‘Tinker’ Keck), of an infomercial for the “AbRocket” Fat Blasting System