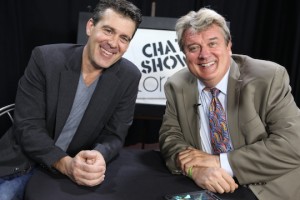 Rick La Fond brought Hollywood online in the mid-90s and has changed the way business is done in the entertainment industry. Backed by a business career in actor services and 23 years as a SAG-AFTRA actor, he has brought several companies to market, and has been instrumental in helping them grow and thrive.

Hailing from Cleveland, Rick earned two degrees from Case Western Reserve University: a B.S. in economics and finance 1986, and an MBA in organizational behavior and marketing 1988, before moving to Chicago to earn an MFA in acting from The Goodman School of Drama at DePaul University – 1991. He worked his way up through the Chicago theatre scene into mainstream TV and film out of both Chicago and Los Angeles.

Shortly after arriving in Los Angeles, Rick worked with ShowFax, the company that revolutionized the way audition scene materials – “sides” – are delivered to actors, agents, managers, casting directors, and studio executives. He then moved to CastNet, which brought actor services online. Rick single-handedly brought about 85% of Hollywood’s professionals onto the Internet for the first time. CastNet grew from serving 10,000 to 100,000 actors.

In 2001 Rick joined Bob Stewart and created Now Casting, a game-changer in actor services and a complete information delivery upgrade for the entire entertainment industry. He is currently the key executive in charge of member services, operations, industry relations, marketing and strategic alliances.

Starting in the Fall 2012, he and Bob developed iActingStudios, another first in the entertainment internet universe. iActing Studios already features over 50 of Hollywood’s finest Master Teachers of Acting Techniques and Career Innovations, featuring hundreds of hours of recorded classes, live online seminars, and one-on-one coaching. Already a stunning achievement, iActing Studios is on target to become the world’s most powerful online tool for actors in search of a place start or advance their careers and craft.