PUPPETRY OF THE PENIS​, a show Vanity Fair called “dementedly good fun!” requires astonishing stamina, an unbelievable stretch factor and an amazing level of testicular fortitude. The show leaves women and men gasping with more than 40 heroic and hilarious installations, including crowd pleasers, tourist attractions and food products. Audiences are in hysterics over their such as “The Pelican,” “The Windsurfer,” “The Eiffel Tower,” “The Loch Ness Monster” and their signature creation, “The Hamburger.”

PUPPETRY OF THE PENIS ​Creator and Producer Simon Morley, was excited and delighted to announce “Finally we will bring our art form to Las Vegas! It was great to play New York, London and Paris, but “Sin City” is truly where we belong. Vegas loves Penis!”

THE PUPPETEERS
BARRY BRISCO
Barry Brisco, Native of Plainfield NJ, earned a BA in Theatre Arts Management and Speech Communications. Barry’s talents merited opportunities to travel the world, most notably to Edinburgh, where he starred in a one man show, David Babani’s critically acclaimed “FLEETWOOD COUPE DE’VILLE CHAT SHOW” as well as the 2003 Australian and US tour of “PUPPETRY OF THE PENIS”. Barry
had an extensive 6 year run in Jordan Roths and Diane Paulus’s Of Broadway hit “THE DONKEY SHOW” In the US and London’s West End. Some of Barry’s IMDB Credits include:
for television, 2015 season opener of Ray Donovan, Viral The series, Wheel of Fortunes 5K, Shit My Dad Says, Chocolate News and Thank God You’re Here. For Film, Dreamgirls, Star Trek, Troma’s Toxic Avenger 4 and Terror Firmer. At the 2012 Hollywood Fringe Festival, Barry received positive attention with “LOVE IS A BATTLEFIELD”, Starring Broadway’s, Gloria Estefan Anna Viallfiane’ Barry’s original play showcasing his ability not only as a performer but also as a playwright, director and producer. Barry is represented by Melanie Sharp, Sharp Talent Management LA.
INSTAGRAM @BARRYBRISCO, TWITTER #barrybrisconews, IMDB BARRY BRISCO.

Rich Binning
Rich Binning grew up in the farmlands of Ohio. After a four year pit stop at the Conservatory of Performing Arts at Point Park University in Pittsburgh to earn his BFA in Musical Theatre, he moved to NYC where one of his first auditions was for Puppetry of the Penis. After multiple tours of Norway, Sweden, Denmark, Finland, Belgium, Canada, the U.S., and extended runs in New York and Los Angeles (where he also did a private show for Christina Aguilera) with Puppetry of the Penis, Rich then helped create and launch the world premier of Puppetry of the Penis 3D. The 3D incarnation of the show was a massive hit at the Edinburgh Fringe Festival and a subsequent UK tour followed, during which Rich made his West End debut at the Leicester Square Theatre. Rich occasionally spends time in shows where he is forced to wear clothes. Regional credits include, Thou Shalt Not (Pittsburgh Playhouse) Ann Reinking’s Piano Keys, Oklahoma! (Huron Playhouse) How to Succeed In Business Without Really Trying, Anything Goes, and Spamalot at the Arts Center of Coastal Carolina. 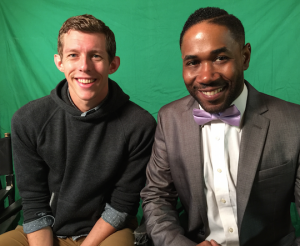