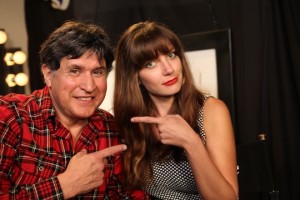 John grew up in the Nevada State Children’s Home. He was in the Army in Viet Nam. And, he made a living for many years as a singer / entertainer.

John is a songwriter. His song, “Dustoff,” which honors the helicopter and its crews that pick up the wounded and dead after a fire fight has been honored by the Dustoff Association and has appeared in several movies. Dustoff and some of John’s other songs are available on “iTunes.”

Julie Langan, host for ActorsE Chat, Actors Reporter, and British Airlines, to name a few, was born on the South Side of Chicago where she spent fourteen years in Catholic school.

Julie will be co-writing with John Michael Ferrari a book on The Art of Hosting.