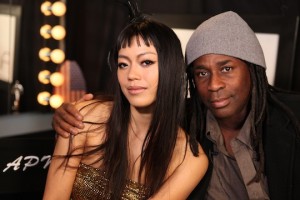 Andrea Lin is a multi-faceted performer and artist from the far East, who has blended dance traditions from every corner of the globe into her unique, cutting edge style. Trained in Ballet, modern, Latin, ballroom, Hip-Hop contemporary as well as Chinese folk dances at a young age, Andrea moved to New York City, and in 2004 created Dance a GoGo. Dance a GoGo is more than a style, it’s an ethos that physically expresses Andrea’s belief that the natural beauty of human bodies is proven through dance, the purest medium for illuminating the core of who we are.

While Andrea has numerous credits for modeling and acting, her heart belongs to dance. Performance is more than just Andrea’s passion, it is her first love. In addition to appearing in music videos for such acts as Britney Spears & Madonna, Velvet Revolver, Jamie Foxx, L’il Kim, Mariah Carey, P. Diddy & Lenny Kravitz, Leela James, and LL Cool J,Andrea has choreographed for major touring shows involving every possible style from modern dance to acrobatics, and producing massive night club events ranging from runway modeling to fire dancing. In 2004, Andrea decided to use her expertise to create a dazzling dance experience for the everyday woman and thus, Dance a GoGo was born. It wasAndrea’s goal to bring a style of dance fitness that is accessible and effective to the non-professional, no longer would the rushing of owning a dance floor be limited to a select few “nightclub aristocrats”. She is committed to providing women an avenue to dance, and a method that is sexy and fun but also healthful, fitness minded, and crackling with attitude.

Projecting sexuality is an animalistic instinct, it’s not an act, it’s a matter of being.
– Andrea

ActorsE Chat is a Live Chat Show M-F, 10-11aPST, on Actors Entertainment, a channel on the Actors Podcast Network, and this episode of ActorsE Chat is produced by Pepper Jay Productions LLC, with PR-Marketing-Sales by Live Video Inc.