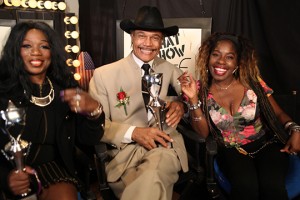 His most recent interview was with the legendary columnist Burt Boyar; best friend of the late Great Entertainer Sammy Davis Jr. Burt Boyar wrote articles for magazines, Esquire, TV Guide, New York, etc. He is also author of Sammy Davis Jr.’s autobiography Yes I Can, Why Me, and Photos by Sammy Davis Jr. The interview took place at the prestigious MBS (Manhattan Beach Studios) in Manhattan, CA.

Cerdan was honored with an Media Award; along with his Co-Host Carole Gray; at the Bugatta Lounge in Hollywood. The Magic Image Magazine of Hollywood is gearing up for a cover story on Cerdan in July this year.

Although Cerdan is actively involved with celebrities; his greatest passion is painting. He has created paintings for Ellen Degeneres, Tommy Lasorda, Magic Johnson, and Simon Cowell. He has a Beatles painting that he is very proud of which was stolen from Los Angeles, and missingfor two years; it ended up in Texas and was finally returned to Cerdan.

Emrhys spent the beginning months of 2013 in Bhutan shooting the lead in the feature film Kushutare: Pattern of Love. The film is set for an international release in the summer of 2014.

Emrhys currently divides his time between Los Angeles and London.

ActorsE Chat is a Live Chat Show on Actors Entertainment, a channel on the Actors Podcast Network, and this episode of ActorsE Chat is produced by Pepper Jay Productions LLC, with PR-Marketing-Sales by Live Video Inc.