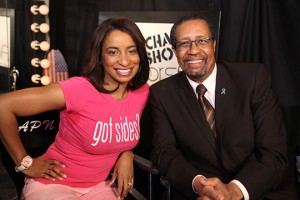 Tammi Mac interrupts your favorite television shows frequently, as she is seen in over a dozen national TV commercials, from Verizon to Capital 1. She dishes the dirt as a recurring guest host on The Logo channel’s The Gossip Queens. She has also set the Los Angeles stage on fire in Don B. Welch’s Idella’s Soul Shack, The Bachelorette Party and August Wilson’s The Piano Lesson. A student of the theatre, Mac has earned a Master of Fine Arts in theatre and has trained with the Groundlings. Her extensive voiceover work includes AARP, Baskin Robbins, State Farm, Union Bank, McDonald’s and the list goes on. Most are familiar with Mac because of her afternoon radio show, Mac and Amiche, which is rated #1 with African Americans in Los Angeles. The show airs Monday-Friday from 4-8pm on Stevie Wonder’s radio station 102.3KJLH FM. As a high school student Tammi Mac began her radio career at Texas Southern University’s radio station, KTSU 90.9 FM, as host of the slow jam show,”Simply Soft”. As an academic scholarship graduate of Bennett College in Greensboro, North Carolina, she carries a Bachelors of Science and Arts degree. At Bennett she also continued to soar in her radio success, becoming host of WQMG-FM .97.1’s morning show. Her acting career smiled on her as she set UIL theatre competition records at Jack Yates high school in Houston, Texas under the leadership of Sandra Shelton. While matriculating at the University of North Carlina-Greensboro, Tammi Mac participated in theatre competitions with North Carolina A&T University because of the lack of opportunities for black students in theatrical productions at UNCG. Perservering, she received her Master’s of Fine Arts in theater from UNCG. This well-versed talented, writer, producer, air-personality and actress is now knocking down the doors of Hollywood much like her Southern predecessors, Jaime Foxx, Matthew McConaughey, Isaiah Washington, Chandra Wilson, Debbie Allen and more! Mac also produces radio and television commercials under her production company, MACJACK. Mac is all over Hollywood and is hard to miss, but if you do happen to miss her on 1 of her many commercials or in an LA theatrical production or on the big or small screen you can always hear her daily on her highly sometimes controversial afternoon radio show on 102.3KJLH.