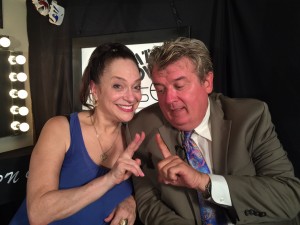 Betsy Hammer
Betsy Hammer is a Professional Singer/Songwriter, Music Producer, Associate Music Supervisor, and Actress who enthusiastically loves her work in Music, Film, Theatre, and TV. For many years, she’s been immersed in the Entertainment industry.

As an Actress, Betsy performed lead and supporting roles all throughout her elementary, junior high, and high school years. At Ohio University, Betsy performed in several theatrical productions, including “The Marriage of Figaro” and “Showboat.” After graduating, Betsy auditioned for and got the role of “Prudie Cupp” in the Broadway-produced musical, “Pump Boys and Dinettes,” for which she became a member of Actor’s Equity. As a sit-down company, “Pump Boys” did a six-month, eight-shows-a-week run, at the magnificent Palace Theatre, in Cleveland, Ohio’s great Playhouse Square Entertainment Center. Thereafter, Betsy moved to Nashville, Tennessee, where she performed the role of a Record Executive in the “Music City Blues” TV pilot. In 2001, Betsy moved to Los Angeles, where she began working with Adam Sandler and was featured as the voice of “Phone Sex Lady” in the animated feature film “Adam Sandler’s Eight Crazy Nights.”

Betsy has sung and recorded with Neil Young, Adam Sandler,Theodore Bikel, Gary Platt, starred in the Broadway/Cleveland-produced Equity musical, “Pump Boys and Dinettes,” and “The Sound of Music.” Betsy is featured in the role of the “Phone Sex Lady” in “Adam Sandler’s Eight Crazy Nights.”

Betsy is a Featured Artist on the duet of “Sabbath Prayer” with renowned Broadway/Folk Singer, Theodore Bikel, for “The Jewish Songbook: The Heart and Humor of a People,” produced by Brooks Arthur.

Betsy’s music video, “Hang Onto Your Dreams,” (http://www.youtube.com/watch?v=mnW_h-QyxdA) guest stars Flavor Flav (who wrote the entire Intro), Shayna Rose, Wendy Liebman, Patty Schneider, and Rodney Allen Rippy. “Hang Onto Your Dreams” was directed by Dave Digby of Project X Productions, along with great help from Producing partner Sean Madaras. “Thanks to all my talented and wonderful friends who joined me!” The video runs 4:48, and there’s a 2nd song in the End Credits, featuring guitarist/composer Waddy Wachtel.

Please enjoy some of my latest recordings on SoundCloud

Betsy’s song “I Just Wanna Dance!” was a single for Heather Gilbert on Raider Records. Her song “What Would You Write If You Wrote About Me?,” co-written with John Tirro, was recorded by Kenny Marks on WORD Records. For Norm Macdonald’s comedy album, “RIDICULOUS,” Betsy’s “Legend’s Waltz” was used as the Theme Music for his funny skit, “Tex Hooper.”

On MTV’s “My Super Sweet 16,” Betsy’s song “Rock The House,” co-written with David Raines, was performed by “Official Hot Mess,” the singing team of sisters Kristy and Lindsey Landers.

Betsy has served as an Associate Music Supervisor, Music Consultant, and Music Co-Producer for several of Adam Sandler’s films, including “Grown Ups,” “Click,” “You Don’t Mess With The Zohan,” and “Just Go With It.” Through her work with Happy Madison Productions, Betsy served as Music Co-Producer for the Animal Voices in the End Titles song for “Zookeeper,” starring Kevin James.

One of the greatest adventures Betsy has had as Music Producer was producing, one-on-one, legendary icon, Cher, who played the Lioness in “Zookeeper.” While recording Cher’s vocals, Betsy and Cher literally sang across from one another on facing microphones–as Cher deftly learned all of her singing parts–on the spot. Cher would ask Betsy to come up with a harmony, and Cher would nail it. It was totally exhilarating singing and working with Cher–a truly sensational experience. Also for the “Zookeeper” End Titles song, Betsy had the pleasure of co-producing these other great artists: Sylvester Stallone, Judd Apatow, Maya Rudolph, Jim Breuer, Rich Minervini, Jon Favreau, Faizon Love, Bas Ruten, and the one-and-only Adam Sandler, whose character “Donald the Monkey” is both hilarious and phenomenal!

Betsy has had the pleasure of working with actor/comedian/singer/songwriter Adam Sandler at his film company, Happy Madison Productions, for twelve (12) years. During that time, she had opportunities in various roles– as singer, actress, music co-producer, music consultant, and as an associate music supervisor in Happy Madison’s music department.

As Associate Music Supervisor, Betsy worked on the following films: “I Now Pronounce You Chuck & Larry,” “You Don’t Mess With The Zohan,” “The House Bunny,” “Bedtime Stories,” “Grown Ups,” “Just Go With It,” “Jack and Jill,” “That’s My Boy,” and “Grown Ups 2.” Betsy served as Music Consultant for Adam’s film “Click.”

If you’d like to become proficient in and enhance your singing, speaking, and performing skills, please contact Betsy Hammer at betsyhammermusic@gmail.com.

Jared Sandler, Actor/Singer (“Blended,” “Grown Ups 2,” “Pixels,” “Paul Blart 2″ ) : “There’s nobody more passionate about music than Betsy Hammer and her coaching is extremely effective. You will discover your voice, your potential will keep growing, and you’ll have a blast singing all styles and rocking out with her!”

Jennifer DeMinco, Singer/Actress (“Made of Honor,” “Georgia Rule”) : “As a trained singer, when I first met Betsy on a film set, I was taken aback by her voice of pure gold. Add to that flawless skill, an impeccable ear, spot on intuition, her magnitude of expertise, a heart that matches her voice and there you have Betsy Hammer.”

Shayna Rose, Singer/Actress/Writer (Star of Nickelodeon’s “The Fresh Beat Band”): “I think the most valuable thing I learned from Betsy was how to perfect my pitch. She really helped me focus in on ‘tuning up’ and naturally adjusting my vocal so that I was a much more accurate and professional live singer. Now I always hear her voice in my head reminding me what I need to do to be great! Amazing coach!”

Alex Schneider, Singer/Actress/Writer (member of JC Chasez’s new girl group “Girl Radical”): “Any half decent singer in LA can call themselves a “vocal coach,” but Betsy Hammer is the real deal. She tailors lessons to your individual voice and is great at picking songs that work for your voice. She has helped me prepare for performances and even helped me put my own spin on my favorite songs. My favorite part of working with Betsy was working on original songs. I love to write with her! ”

Lisa Liu, Virtuoso Violinist (Concertmaster/Orchestra Leader, “America’s Got Talent,” “The X Factor,” “The Voice,” Duran Duran, Elton John, Slash, Celine Dion, and more): “I went to Betsy for an audition coaching, and between bursts of hysterical laughter, she shared her wisdom, insight and compassion. I left the lesson feeling confident and inspired. I am truly grateful for the ongoing friendship and support.”

Ashley Schneider, Actress/Singer (“Extreme Movie,” “American Virgin,” “Autopsy,” “House Bunny”): “Betsy helped me find my voice! I came to her for voice coaching when I needed to broaden my skill set for auditions to include singing. She encouraged me to sing out, and helped me to fine tune my ear and tone. Most importantly Betsy taught me to have confidence in myself!”

Betsy Hammer has worked in many capacities since ’96, in Nashville, LA, and once in NY, with GRAMMY Award-winning Comedy & Music Engineer/Record Producer and Music Supervisor Brooks Arthur (http://www.brooksarthur.com) who has had a distinguished career in the Entertainment Industry. Betsy has served as Assistant, Co-Producer, Associate Producer, Associate Music Supervisor, and Co-Writer with Brooks Arthur, as well has having been Produced by him. “It is always great when I’m in the studio singing with Brooks!”

While living in Nashville, Betsy had the great privilege and pleasure of becoming friends with one of her Music Mentors, the late great Chet Atkins (http://www.misterguitar.us). Chet invited Betsy to recording sessions, invited her to sit in on some important business meetings, and even treated her to a guitar at one of the guitar stores they visited! “Chet was an incredibly inspirational human being … certainly one of the most brilliant, funny, down-to-earth artists and subsequent mentors I’ve ever had the privilege and pleasure of knowing.”

This segment of ActorsE Chat was co-produced by Pepper Jay and Kurt Kelly.

ActorsE Chat is a Live Chat Show on Actors Entertainment, a channel on the Actors Podcast Network, a Pepper Jay Production, with PR-Marketing-Sales by Live Video Inc.