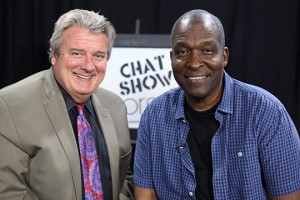 Rodney Saulsberry is the voice of choice for behind-the scenes narration. This Detroit native and University of Michigan Graduate, is one of the most sought after voice-over talents in the country. He’s the author of a bestselling book, You Can Bank on Your Voice and his new book, Step Up to the Mic. His latest book is “Rodney Saulsberry’s Tongue Twisters and Vocal Warm-Ups.” 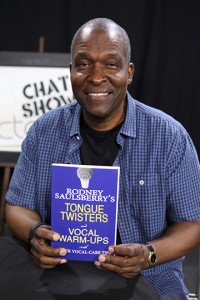 A renowned voiceover instructor, students travel from across the country to attend his workshops. His teleclasses are also very much in demand from students around the world. His Consultant’s Club Coaching Services have produced many voice over performers who are now enjoying successful careers.
As one of the top trailer voices in the business, movie fans have heard Rodney’s voice promoting some of their favorites: How Stella Got Her Groove Back, The Best Man, Friday, Friday After Next, Dumb & Dumberer, Dairy of a Mad Black Woman, Tupac Resurrection, Undercover Brother, and more recently, the George Lucas produced, Red Tails.
Saulsberry’s distinctive announcers voice is literally everywhere. In March 2003 he announced the 34th NAACP Image Awards and the Essence Awards specials on FOX Television
What do Zatarain’s, Twix Candy Bars, Toyota Camry, Instant Tax Service, Honda Accord, Lincoln LS, Verizon, Alpo, 7UP, Burger King, SBC, and Nestle Crunch all have in common? Saulsberry has been a voice-over commercial pitchman for all of these products and many others on television and radio. He can also be heard reading Books on Tape, as well as narrating E! Entertainments True Hollywood Story, about Motown R&B singer, Marvin Gaye.
Animation is another strong suit for this versatile voice actor. Saulsberry is the voice of Joe Robbie Robertson on the hit cartoon series Spider-Man, Chyron in The Animatrix, and the newly released and a million sold DVD The Invincible Iron Man where he plays the role of James “Rhodey” Rhodes. He has guest starred on many other Saturday morning cartoons that include Rugrats, Duckman and Static Shock.

Talking is not the only way this crooner has used his instrument. Rodney lent his melodious baritone singing voice to a jubilant ensemble of background singers on a spirited recording of Hakuna Matata on The Lion King soundtrack. He continued his animation musical journey singing on two numbers from The Prince of Egypt soundtrack, When You Believe and Playing with the Big Boys. As a soloist, he has recorded two rhythm and blues albums that have produced two R&B singles, I Wonder and Look Whatcha Done Now. He has performed on Soul Train, Dance Fever and The Pat Boone Show. His music videos have played in heavy rotation on VH1 and BET.
Saulsberry first set foot on west coast soil when he came to town with a national touring company of Your Arms Too Short To Box With God after a successful Broadway run. The musical was an instant hit in the Los Angeles area and led to an illustrious television acting career for Rodney that included guest starring roles on Monk, Law & Order: LA, Taxi, Mash, Gimme a Break, Hill Street Blues, and Dr. Quinn Medicine Woman. He also enjoyed series regular status as Jeff Johnson, on the daytime soap opera, Capitol and most recently, Rodney is a two time NAACP Image Award Nominee for his portrayal of “Anthony Walker” on the Daytime Television Series, “The Bold and the Beautiful.”
To perfect his craft, Saulsberry is no stranger to hard work. In an interview with Black Enterprise Magazine, he said: “At breakfast, I read cereal boxes out loud. Driving down the street, I read street signs. I listen to news radio and repeat word for word what’s being said. I vocalize as if I were going to sing. And when I’m watching trailers in the theater, I’m repeating it all quietly.”
No doubt about it—Rodney Saulsberry is the voice of choice for behind-the-scenes narration.