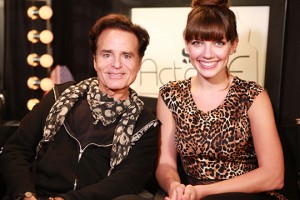 Mitch Hara (actor/writer) is a Syrian, Turkish, Lithuanian, Gypsy, Jew, born in Skokie, Illinois and raised by wolverines. His colorful childhood shaped his unique voice and eccentric view of the world. He escaped to New York at age 19, when he was invited to join the Actors Studio and studied with Lee Strasberg, Shelley Winters and Al Pacino, among others. He did various plays off Broadway, hit the comedy clubs and performed with improv companies.

He was called to L.A. to do a burp-and-it-was-gone pilot, Eddie Dodd with Treat Williams. He subsequently did numerous guest spots including a recurring role on ER, followed by two more pilots and wound up as staff writer on the Fox/Warner Brothers sitcom Lush Life.

Then, in a life-affirming introduction to the independent film world, he starred in The Art of Dying with Wings Hauser. His standout performance landed him starring roles in 11 more indies, including, Flexing with Monty with Sally Kirkland; The Wacky Adventures of Dr. Boris and Nurse Shirley with Paul Bartel and Karen Black (Mitch played Nurse Shirley); A Killing Obsession with John Savage; and Cahoots with David Keith and Keith Carradine.

Mitch has written, directed and performed in three critically acclaimed plays, Cracks In The Mask, Polo Lounge and Shopping For Shoes In A Skirt & No Panties. He co-wrote and directed the one-woman musical, Tsk, Tsk, Tsk and directed Poppy Champlin’s one woman show Chocolate Sandwich. He won the Drama-Logue Award for Best Actor for his portrayal of Sister Coco Call-Me-Ishmael, a mental-patient-drag-queen-nun, in The Horrible and Tragic Life Of The Singing Nun.

His irreverent, gay romantic comedy, No Fingerprints On My Heart won best screenplay competitions at the IFP/West, Telluride, Key West and Outfest film festivals. He will be starring with Doris Roberts and Howie Duetch is directing.

Mitch’s short, Horrible Accident, opened the L.A. International Film Festival and then played all over the world. “Hara caresses your heart and then rips it out,” wrote the Telluride Times.

Currently, he’s directing his series Adam Astra Casting, a mockumentary about casting, in which he stars alongside six-time Emmy Award winner Doris Roberts.