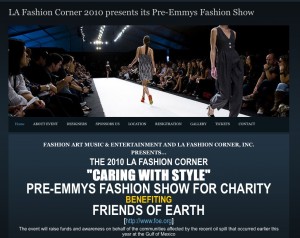 On the Red Carpet:

On the Red Carpet:

The event raised funds and awareness on behalf of the communities affected by the oil spill earlier this year in Louisiana’s Gulf of Mexico. While many designers have supported their individual causes in the past, this event marked the first time a group of designers joined together in the name of one cause. The Gulf spill has devastated the long-term livelihood of thousands of Gulf residents – fisherman, restaurant and resort owners/workers, sport fishing operators, shop owners and business owners and workers at large – leaving them all at dire risk for their economic future. Additionally, the sea life of the area has suffered greatly; turtles, fish, birds, alligators, and vital plant life are all victims of this tragic event.

Charity Lives, LA Fashion Corner and F.A.M.E (Fashion, Art Music Entertainment) came together to provide this star-studded fashion show capping off the 62nd annual Emmy Awards by showcasing some of the country’s most exciting new fashion designers. The fashion industry’s top models, wardrobe stylists and hair and make-up artists donated their time and talent to the cause.

The red carpet was followed by a luxury fashion show with music, fashion industry exhibits, gourmet appetizers and complimentary gift bags. A VIP reception featuring celebrities from the worlds of entertainment and fashion was held for special sponsors and donors.

Acting in Style is on Actors Entertainment, a channel of the Actors Podcast Network, a Pepper Jay Production.