“Wait Until Dark” for an enjoyable evening of theater 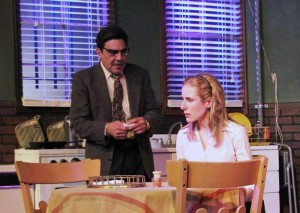 David Colwell, Director of this suspense thriller, and his crew did a masterful job. All elements came together–from set design, to sound, music, lighting, and casting. Before the play even began I settled into the world due to the detailed set, and before any words were spoken a suspenseful but playful ambiance was created with music and lighting. The moment before was established beautifully with a well selected music cue that got that accompanied the actors’ entrances, got everyone’s attention, and set the mood of the play.

The first scene could run a bit more smoothly, but the rest of play just flew by. The players were well cast and each stepped into their characters flawlessly. It was easy to be engrossed and get caught up in the suspense. The ladies in the cast stood out and the men supported them nicely.

Liza de Weerd did a marvelous job playing Susy, the blind woman who is the target of three ex-cons attempting to retrieve a doll stuffed with drugs. Liza was captivating and believable every step of the way, and the audience rose to their feet in a standing ovation at curtain call. 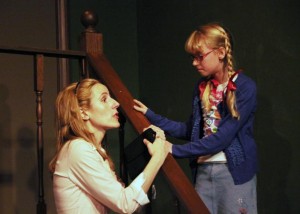 Another crowd favorite was the youngest member of the cast, Kaylena Rose Mann. Her great presence and commitment to playing the bratty but helpful neighbor got lots of cheers from the audience.

Chris Winfield, who did a marvelous job designing the set also played Mike Talman. Both him and Bert Emmett who plays Suzy’s husband supported Liza’s performance nicely. Leo Weltman was humorous as Sergeant Carlino, and Robert Gallo playing Harrry Roat had a few hiccups opening night, but will surely deliver the remaining performances.

It was an enjoyable evening of theater and a must see especially for those who have never watched a production of this long-time Broadway favorite “Wait Until Dark.”

“Wait Until Dark” playing at the Lonny Chapman Theater in North Hollywood until May 8.