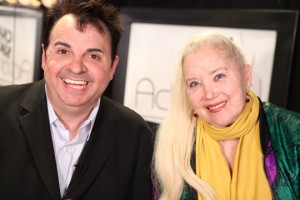 Sally Kirkland is a film, TV, and theater veteran since the 1960’s and is probably best known for the film “Anna,” for which she garnered a Best Actress Oscar nomination and won the Best Actress Golden Globe, the Independent Spirit Award, and the LA Film Critic’s Circle Award. Sally’s first director in 1964 was Andy Warhol in “13 Most Beautiful Women.” Her one hundred and twenty films also include: “The Sting,” “The Way We Were,” “Coming Apart,” “Cold Feet,” “Best of the Best,” “Revenge,” “JFK,” “ED TV,” “Bruce Almighty and “Coffee Date.” Her new film, “Archaeology of a Woman” just premiered April 21st, 2012 at the World-Fest Houston International Film Festival. She was nominated for Best Actress in a TV movie by the Hollywood Foreign Press for “The Haunted- A True Story.” Her television credits include: guest starring on “Criminal Minds,” recurring on “Head Case” and “the Simple Life.” She guest starred on “Resurrection Blvd,” and in the TV movie, “Another Woman’s Husband.” Sally had a recurring role on “Felicity” and “Wasteland.” She starred on the NBC movie, “Brave New World.” She starred in the TV movie, “Song of Songs” and was a series regular on the TV show “Valley of the Dolls.” She also starred in the TV movie, “The Woman Who Loved Elvis.” She played Barbara Healy on “Roseanne.” She starred in the TV movie, “Heatwave” and recurred as Tracy on “Days of Our Lives.” Sally is also a exhibited painter, poet, renowned acting coach and ordained minister.